My original intent was to fly first class to Ecuador and bring as much as I could bring in luggage on two separate trips within a six month period.  As time went on, though, I realized I’d never be able to bring many of the small kitchen appliances and other items I wanted to bring, so I contacted Paul Wilches and Nathaly Consuegra of Relocation Services of Ecuador in September about getting estimates on what it would cost to ship a lift van (an 87″ x 87″ x 45″ plywood container held together with metal straps) or a 20′ shipping container.  For me, the lift van worked out best because I wasn’t bringing any furniture, but many small boxes of household items, a large flat screen TV and  gas grill.

Once I received the estimates, it became clear that the lift van was the best alternative for me, and as it turned out, was cheaper than the cost of trying to fly my belongings down in two separate trips while allowing me to bring in many more items.  Paul and Nathaly coordinated the whole process from beginning to end and Relocation Services of Ecuador has offices in the US as well as Cuenca, so the process was seamless. 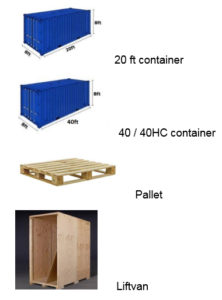